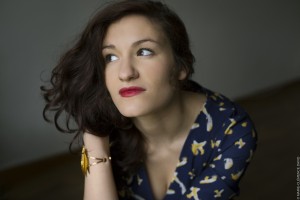 The Belgian soprano Sarah Defrise completed her degree at the Royal Conservatorium of Brussel and the Ecole Normale de Musique de Paris, where she received her Concertist Diploma in April 2016 in the class of Daniel Ottevaere.

She was awarded the First Prize of Contemporary melody at the Enesco Competition in 2016, and the Young revelation Prize at the 13th International Lyric Singing Comptetition in Vivonne.

In July 2018, she was Calamity Jane in Ben Johnston’s Calamity Jane : letters to her daughter at the Théâtre de la Croix-Rousse in Lyon and at the Armel Opera Festival in Budapest for which she was awarded “Best Performer Prize 2018″

During the 18-19 season, she sang again the Fairy in Liège and the role of Bacchis (La Belle Hélène) at the Opéra National de Lorraine in Nancy. She created also her own show, I hate new music, and recorded her first solo album.

In 2019 she sang her first Cunégonde (Candide by Bernstein) in Flagey and Liège, where she sung again Clorinda in December.

Recently, she was the Teenager in Is this the end?, a creation by Jean-Luc Fafchamps at La Monnaie in Brussels.