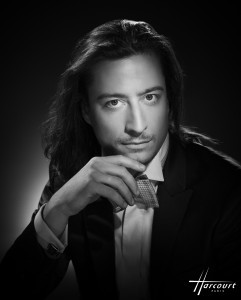 Trained as a pianist and vocal coach, this very fine musician studied singing with Blandine de Saint-Sauveur at the Boulogne conservatory.

His career took off when he jumped in the production of La Nonne sanglante by Gounod at the Opéra Comique as Luddorf. A part he learned in 48 hours.

In September 2018, he sang the role of Morales in Carmen at the Geneve Opera, and Urson in the rare Tarare by Salieri in Versailles, Vienna and Caen. In March 2019, he got noticed by the critics as he sang the part of Bardi in the recreation of the very rare Dante by Godard in Saint-Etienne, before singing his first Silvio in Pagliacci near Paris. Then, he sang the role of Alidor in Isouard’s Cendrillon, always in Saint-Etienne, and the Dancaïre in Carmen with the Lille National Orchestra and the part of Gwellkingubar in Fervaal by d’Indy at the Montpellier Festival.

In 2019-2020, he sang the role of Hagen dans Sigurd by Reyer at the Opéra National de Lorraine, then Méthousaël in Gounod’s La Reine de Saba in Marseille. He is Thierry and the Jailer in the legendary staging by Olivier Py of Dialogues des Carmélites by Poulenc at the Capitole of Toulouse.

He sang his first Zurga in Pearlfishers at the Toulon Opera in December 2019. Then, he took part in the production of La Dame Blanche by Boieldieu at the Opéra Comique, where he sang Gaveston. During the pandemic, he sang Ralph (La Jolie Fille de Perth) and Zurga in a Bizet Gala at the Montpellier Opera under the direction of Laurence Equilbey, before returning to Zurga at the Marseille Opera, alongside Patrizia Ciofi and Julien Dran.

Then, he played his first Albert (Werther) in Montpellier, as well as Richard (Aliénor by Alain Voirpy) in Limoges. An important debut for him was Don Giovanni at the Nuits Lyriques de Marmande in August 2021.

At the beginning of the 21-22 season, he recorded Alcide (Omphale by Cardonne) in Budapest with the Centre de Musique Baroque de Versailles. Then, faithful to the Opéra Comique, he returned to the Salle Favart with the roles of Parker (Les Eclairs by Philippe Hersant) and Capulet (Roméo et Juliette).

He then had a huge success with his first Hamlet at the Saint-Etienne Opera before taking on Oreste (Iphigénie en Tauride) at the Rouen Opera and returning to the Capitole with Starek (Jenufa).

An important moment in his career, in June 2022, he sang his first Rodrigo di Posa (Don Carlo) at the Opéra de Marseille, before making his North American debut as Valentin (Faust) at the Opéra de Québec.

His projects include the role of Philoctète (Déjanire by Saint-Saëns) with the Orchestre Philharmonique de Monte-Carlo, and Marcello (La Bohème) at the Capitole de Toulouse. He will make also sing at the Opéra Royal de Wallonie in the role of the Baron (La Vie Parisienne), which he will also record with the Palazzetto Bru Zane, before singing Luddorf at the Opéra de Saint-Etienne. He will also make his debut at the Opéra National de Paris as the Duke of Verona (Roméo et Juliette) and as Ludovic Tézier’s cover in the role of Hamlet.

During the next seasons, he will be Nelusko (L’Africaine) and Germont (La Traviata) at the Opéra de Marseille.