Born in Brussels in 1991, French-German soprano Caroline Jestaedt studied singing at the Royal Conservatory of Brussels, at the Hanns Eisler Academy in Berlin, and then at the Academy of Music and Performing Arts in Vienna, where she specialized in in the field of opera during her last year of master (2016). She recently joined the Lyon Opera Studio in France.

In 2016, she took part to the Songbook project, in collaboration with Arte and ORF (Austrian Broadcasting), and sang as a soloist at the Allegro Vivo Festival (Lower Austria). She won the second prize at the 3rd Hugo-Wolf International Song Contest in Sofia in 2013 and the Student Jury Prize at the Enschede International Duet Competition (Netherlands) in 2015.

In 2018, she won the fifth prize in “Voix Nouvelles” competition at the Paris Opéra Comique and plays the role of the Fairy in Pinocchio by Boesmans at the Opéra National de Bordeaux.

During the 18-19 season, she sang her first Marzelline (Fidelio) in Luxembourg, Euridice (Orfeo by Monteverdi and Berio) at the Cité de la Musique in Paris, and Najade (Ariadne auf Naxos) in Toulouse.

Recently, she sang Dalinda (Ariodante) under the baton of Marc Minkowski in Grenoble, Paris, Bordeaux, Toulouse, Köln and Hamburg, and took also part in the Christmas concerts of the Bordeaux National Orchestra, conducted by Paul Daniel.

Among her projects : the role of Anna in the new production of La Dame Blanche by Boieldieu with the Co[opéra]tive, on tour in France (Compiègne, Tourcoing, Dunkerque, Rennes, Besançon…), as well as Barbarina in Le Nozze di Figaro at the Capitole of Toulouse. 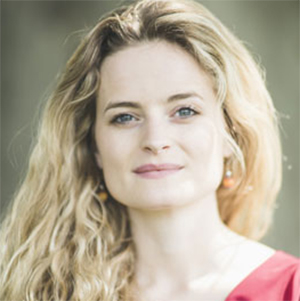