Born in 1995, Andrei Maksimov was born in Petrozavodsk in a musical family. In 2007, Andrei enrolled at the Children’s choir of TV and Radio of St Petersburg where he was a leading soprano-soloist for five years.

In 2012, as a baritone, he won the First Prize of the Elena Obraztsova International competition for young singers. In 2013, he joined the Rimsky-Korsakov. St. Petersburg Conservatory and the Academy of young singers of Mariinsky Theatre, where he sang several roles : Fiorello (Il Barbiere di Siviglia), Brundibar (Brundibar), Yardman (The Nose by Chostakovitch), under the baton of  conductors such as Valery Gergiev, Placido Domingo…

At the conservatory, he sang Robert (Iolanta), Ferdinand (Betrothal in a Monastery), Eugen Oneguin, Guglielmo (Cosi fan tutte), the King (The Love for Three Oranges).

In 201, he was a member of Academy of Modena, where he took lessons withf Leone Maggiera, Mariella Devia, Michele Pertusi e Nicola Martinucci. In summer 2019, Andrei sang the part of Trombonok in the production of Il Viaggio a Reims at the Rossini Opera Festival of Pesaro as a member of Accademia Rossiniana. 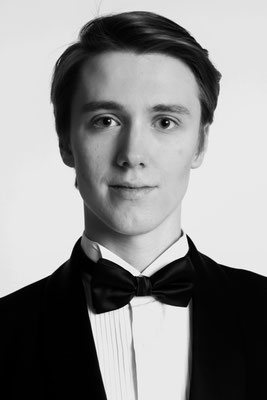